Beginning in 1952 Joann began an intense study of nutrition. She has published numerous articles and a book, Real Food (1990). It would be difficult to find anyone with comparable practical experience accompanied by breadth of knowledge in nutrition. This has enabled her to maintain historical perspective on current dogma regarding fat, cholesterol, animal products, food supplements and consumer attitudes.

In1970 Joann was certified as a La Leche League Leader (La Leche League is the international breastfeeding support group) and has successfully counseled many women seeking a rewarding mothering experience. Joann is deeply persuaded of the importance of breastfeeding not simply as a way to create a happy, healthy and more intelligent child, but as the God given key to awakening in mothers and fathers a committment to quality parenting.

1976 Joann wrote and published Born To Love: Instinct and Natural Mothering. This book explores the intrinsic importance of instinct in infant and maternal behavior as discussed by John Bowlby in his seminal book, Attachment.

Joann became interested in organic gardening and farming in 1950. Thenceforward she began growing and cooking from scratch most of her family’s food. The emphasis at all times was on a full range of animal and dairy foods as enjoyed in traditional cultures. Poultry, goats, dairy and beef cattle joined the family; at one time the Grohman’s grazed a Jersey cow on the lawn of their stately home in England! Joann is also very fond of dogs, cats and horses.

While living in England 1970-75, Joann and Merril Grohman owned and operated a 60 cow Jersey dairy in Sussex.

In 1976 after returning to the US and purchasing Coburn Farm in Maine, Joann continued caring for her family, writing and farming full time until her move to Hawaii in 1986.

Joann once again lives on Coburn farm where she continues to care for her animals and garden and works on polishing her bread baking skills using her red Aga cooker. She enjoys many visits from her beautiful children, 14 grandchildren and 2 great grandchildren. 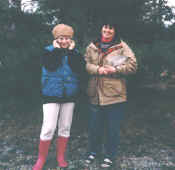